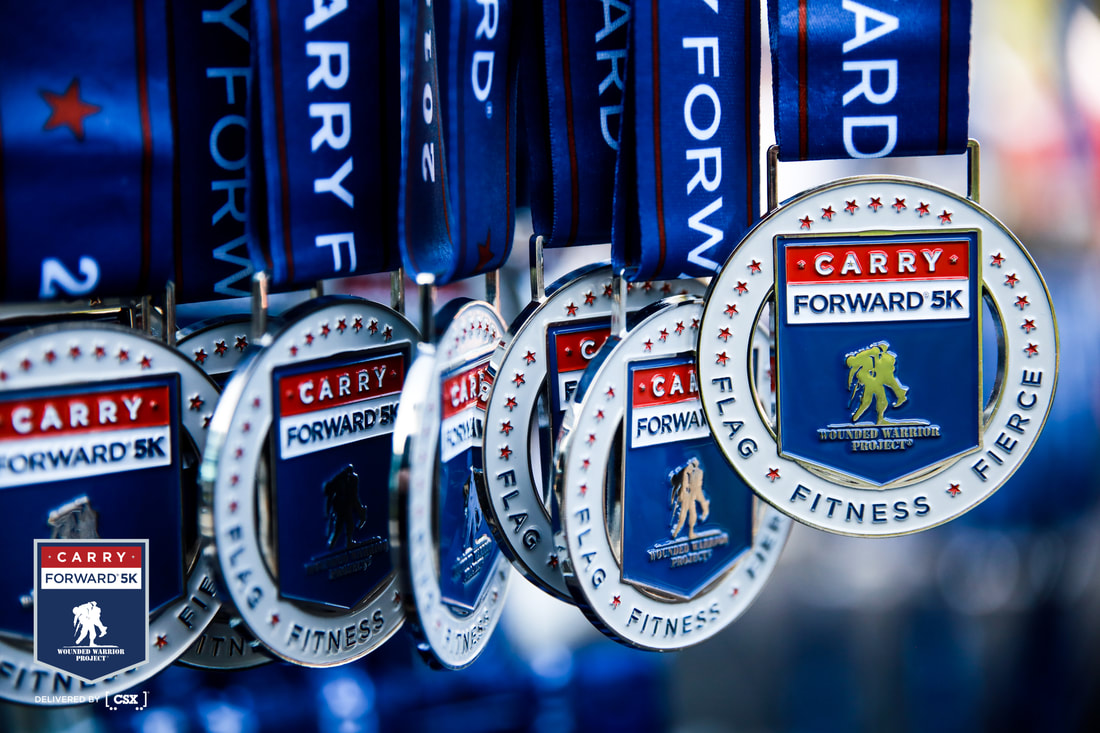 This post is made possible with support from the Wounded Warrior Project. All opinions are my own.

You Never Know Who You Are Inspiring

Inspiring others is not an easy thing to do. However, we all do it whether we know it or not. It can happen in a conversation we have with someone. Through a message, we send someone. Or it can happen with no communication what’s so ever.

You never know who you are inspiring.

Your life, whether or not you see it as wonderful or grand, your experience, is giving life to others every single day. Your life means something to those closest to you and those you think may not know you but are watching you from afar. You can inspire someone, anyone, whether you realize it or not. I had never really thought about the idea of “You inspire, even if you think no one is looking,” too much until last year. But you do. I do. We all do.

Who Inspired me to Walk the Carry Forward 5K

Last year one day, while I was aimlessly scrolling through Facebook, a Facebook friend had shared a story about her Father in Law, who was walking cross-country on foot with his dog, Pam, raising money for the Wounded Warrior Project, a non profit veterans organization that offers a variety of programs, services and events for wounded veterans. To say it got my attention was an understatement. Being a military wife, I immediately felt connected to him and his efforts to raise money for such an important cause in our military community.

For Five months I watched, U.S. Army veteran Ken Brock and his service dog Pam walk mile after mile and day after day cross-country to help raise money on behalf of Wounded Warrior Project. I watched as he went live and shared updates; I would send him messages asking if he needed anything, I donated money when I could. And after completing roughly 2,650 miles on foot, he was welcomed home by his family in Coeur d’Alene, Idaho.

I had no idea who this man was, and he knew nothing about me. But that saying, “You inspire, even if you think no one is looking,” definitely rang true. As I watched this man, I did not know make it to Idaho from Keystone Heights, Florida; I literally cried tears of joy. Brock and Pam had braved the heat, tornadoes, rain, snow, and even life-threatening-traffic on behalf of Wounded Warrior Project.

This courageous and selfless duo made the walk to promote the Wounded Warrior Project programs for service members and veterans with post-traumatic stress disorder (PTSD). 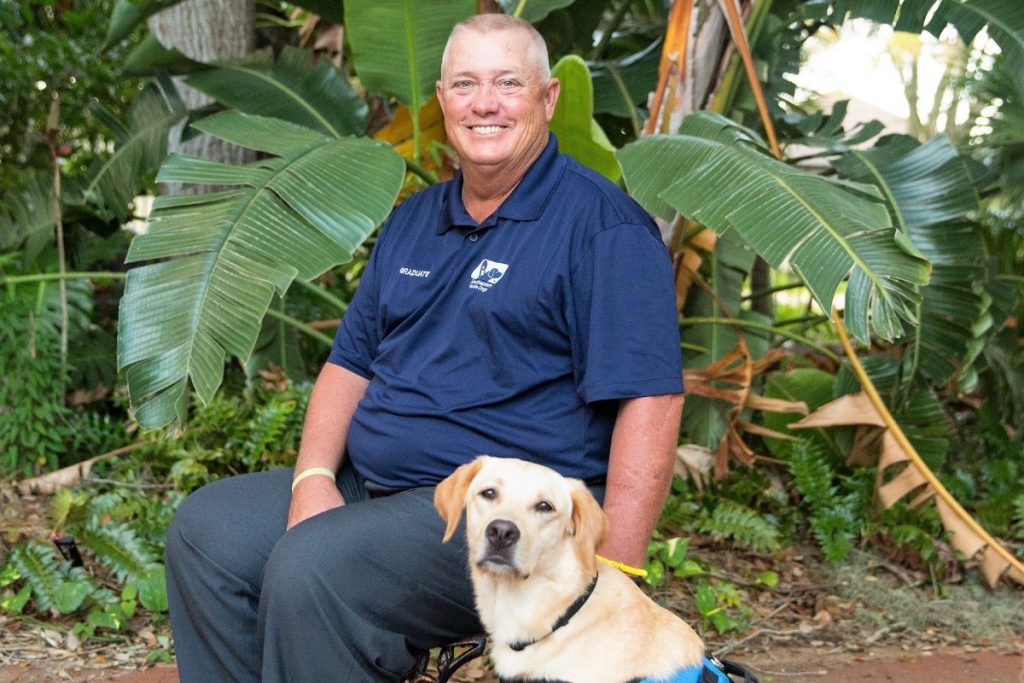 So Who is Ken Brock?

Ken Brock is an Army veteran who has Post Traumatic Stress Disorder (PTSD) stemming from his military service. Pam, a yellow Labrador retriever, is his loyal companion and service dog. Wounded Warrior Project has been instrumental, not only in Ken’s life but also in many other veterans’ lives.

Ken Brock wanted to help the organization so it could continue its mission of helping others. During their walk, Brock and Pam raised over $9,300 in donations for Wounded Warrior Project. Every donation was allocated to help injured military service members living with traumatic brain injury (TBI), PTSD, and physical injuries get the essential support they need after their service.

Ken Brock and his service dog Pam started walking on February 1st at Amvets Post 86 in Keystone Heights and concluded his walk on June 27th in Idaho. Pam sat in a cart pushed by Brock, who wore out seven pairs of shoes during their journey.

It was a journey that spanned more than 2,600-plus miles, but it's a journey I will never forget. With the people that have touched my heart along the way, the different outlook that I've got now from what I had when I left, America is beautiful. It really is.

Ken said that every one of the posts he received on Facebook gave him the encouragement he needed to get out and keep going the next day and every day after that.

You never know what part of your being is breathing life into someone else. Ken and Pam’s selfless act and dedication to raise awareness for our community breathed life into me. It inspired me, and it changed my life. A year later, after seeing Ken walk for such a great cause, I signed up to walk the Wounded Warrior Project Carry Forward 5k. The Carry Forward 5K was a chance for me to put the mission of Wounded Warrior Project in motion, but more importantly, it was a chance for me to give back to the man who had no idea he had inspired me so much the year before. 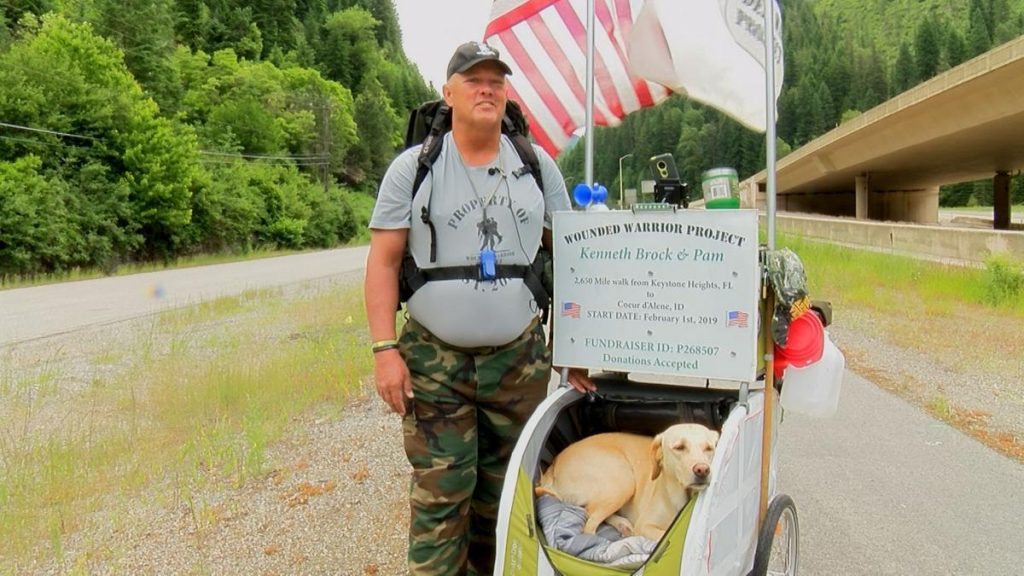 Why I Chose to Participate in the Carry Forward 5K?

Although I had signed up to walk only a 5k, which was a little more than 3 miles, a far cry from the 2,650 miles Ken had walked; I wanted to show him that his selfless acts had changed my life.

“The mission at Wounded Warrior Project (WWP) is to honor and empower wounded warriors — and Carry Forward is your chance to put that mission in motion at one of the most powerful, one-of-a-kind events you’ll ever experience. It’s a unique opportunity to take action for wounded warriors.” 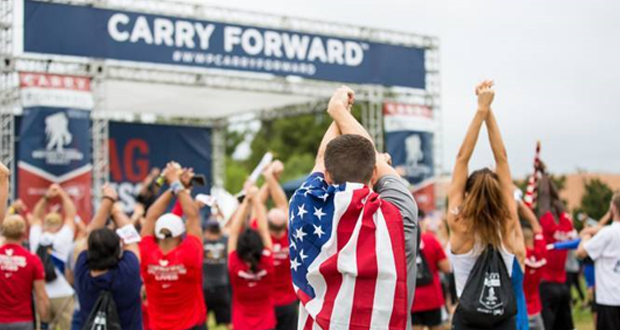 So on September 5th, I loaded up my car, strapped in my kids, and headed downtown Chicago to honor Ken Brock and Pam and carry for them. My family and I walked a little over 6 miles on the Lakefront Trail in Chicago, carrying flags and banners and sharing why Ken and Pam had inspired us so much.

Inspiration isn’t only reserved for motivational speaks; you don’t have to read a motivational book or quote to get inspired. And I know the most powerful motivations aren’t the quotes, YouTube videos, or articles guaranteeing “10 Steps to Success.” My strongest influence is the Army veteran, who I didn’t even know from Keystone, Florida, who walked 2,650 miles across the country to bring awareness for a cause so important in our military community. The one who woke up every morning in rain or shine, hot or cold, who walked 2,650 miles wore out seven pairs of shoes just because he wanted to raise awareness.

You may not know whom you’re inspiring with your daily actions, but trust that everything you do maybe an inspiration to someone, even if you don’t know them. And this military veteran was why I chose to participate in the Carry Forward 5k. 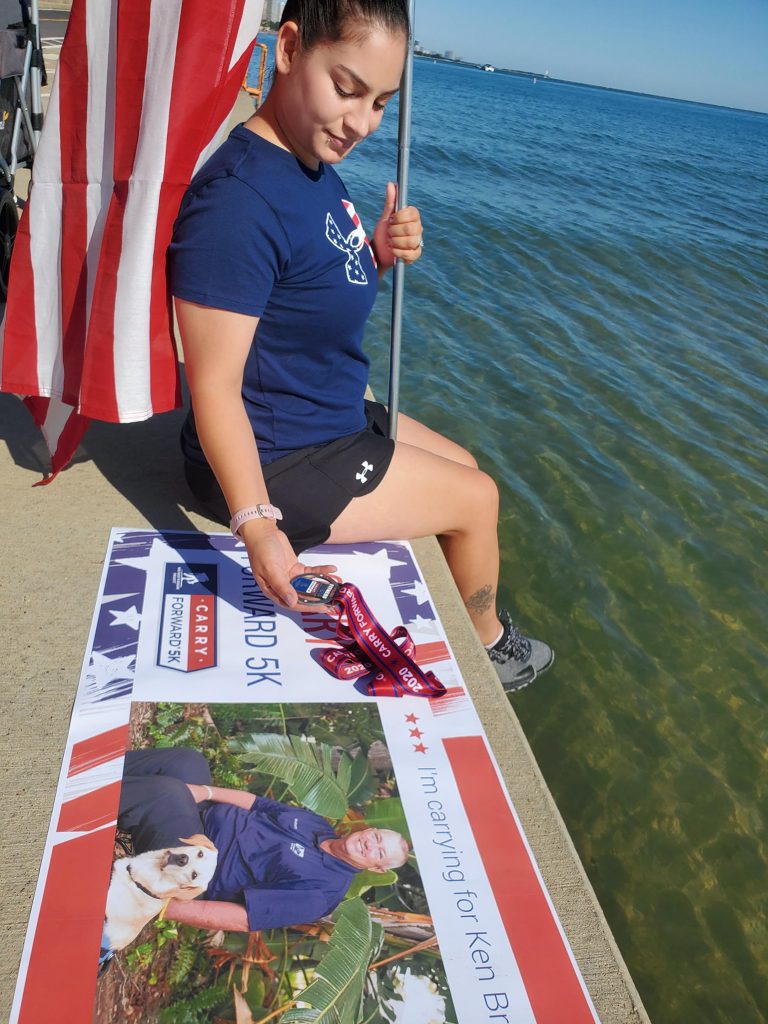 The Carry Forward 5k was my chance to take action in a unique and meaningful way for wounded warriors like Ken Brock. Every day, 50 service members sign up to get critical services and support from WWP. Because of YOU, warriors can get support while on their journey to recovery, whether their injuries are visible or invisible.

How Can You Help Support the WWP mission? 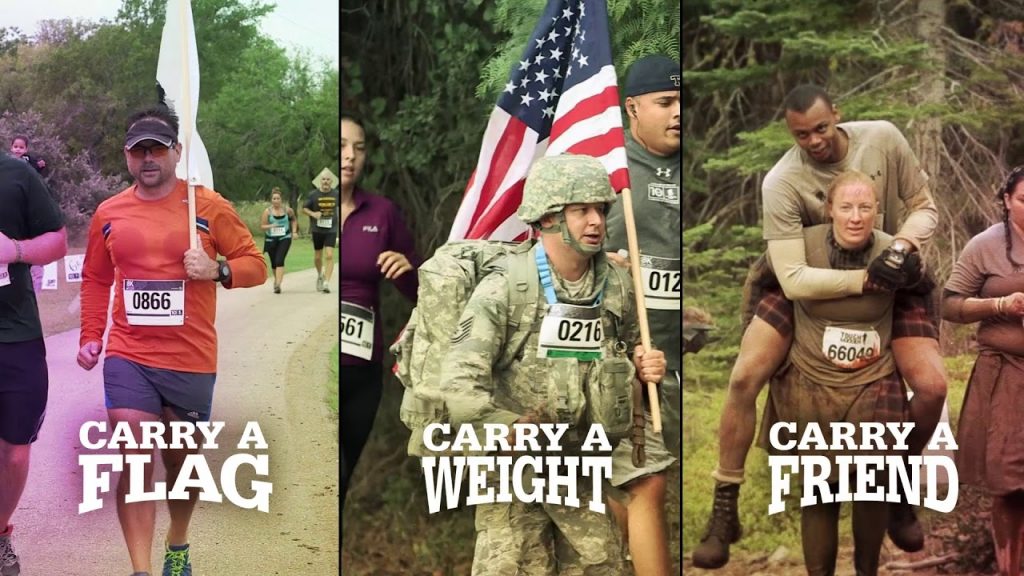 Please help our A Sailors Wife team support the WWP mission of honoring and empowering wounded warriors by supporting our Carry Forward or hosting a virtual 5K of your own. Warriors across the country will appreciate your support.

To donate to WWP, click our A Sailors Wife page for the Virtual 5K here:

Is there someone who inspires you? Tell me in the comments below. 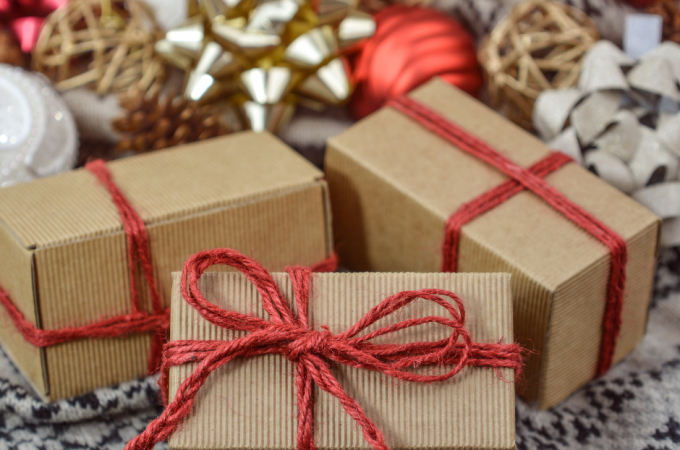 10 Unique Military Gifts That Your Loved Ones Will Love 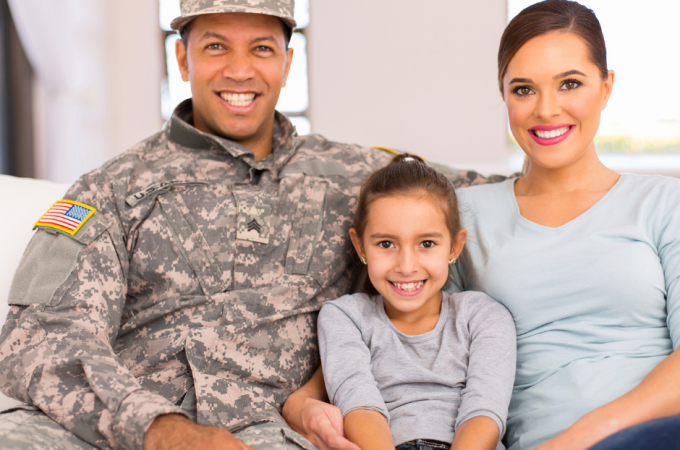 How the USO Helps Military Spouses 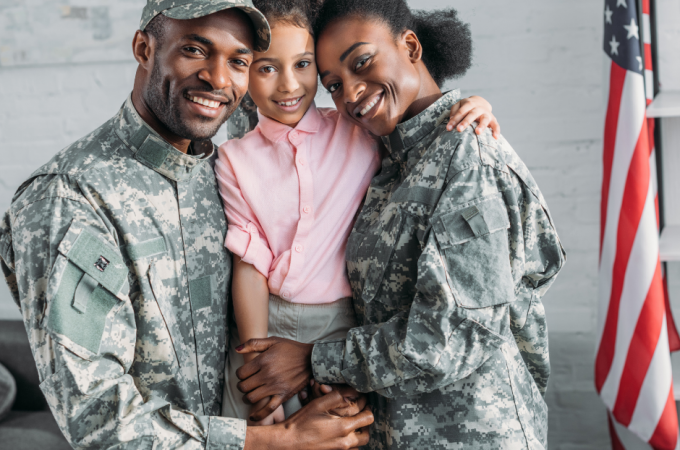 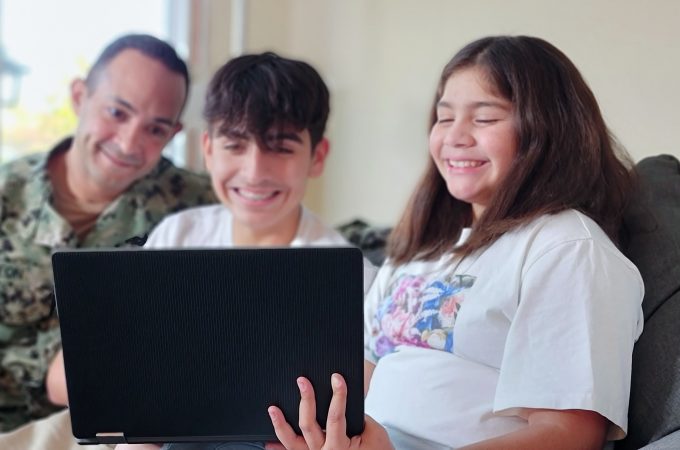 Cybersecurity and the military community: What you need to know to stay safe 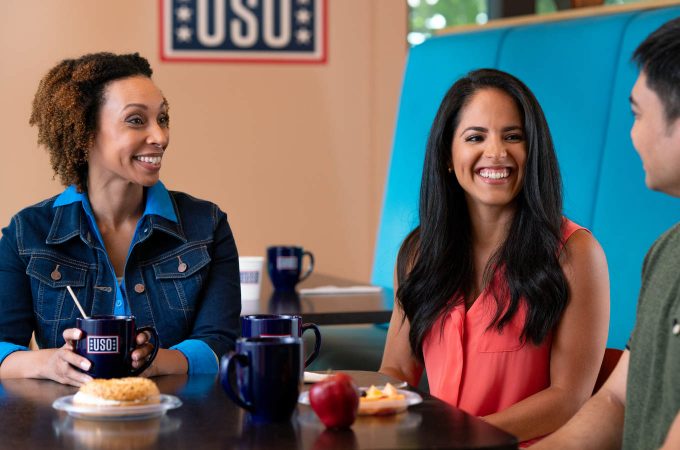