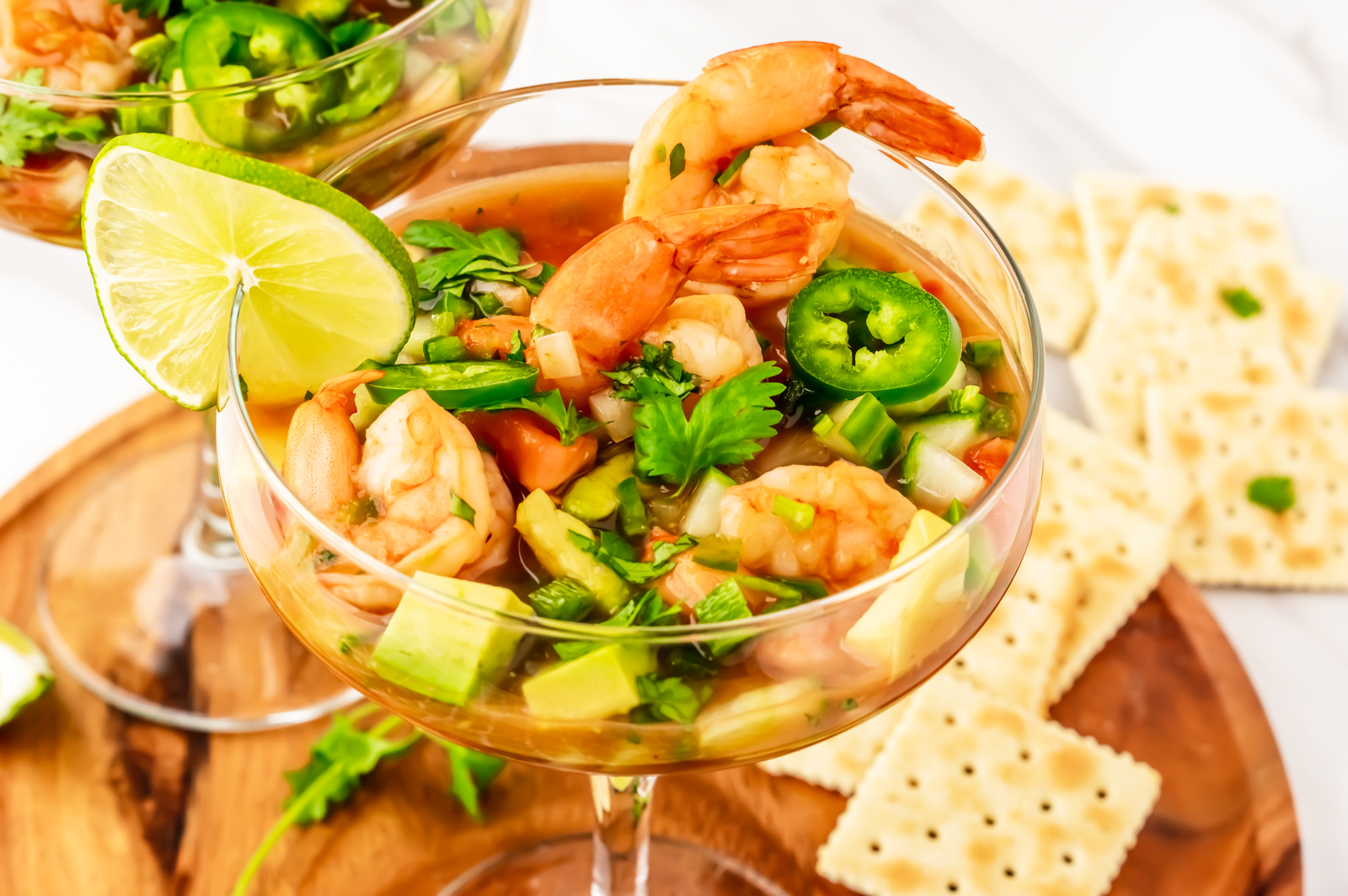 We’ve been celebrating Hispanic Heritage Month on the blog, and today, I’m bringing you a fabulous seafood recipe from Mexico. It’s called Coctel de Camarones! It’s a little bit like a gazpacho, but with hearty chunks of shrimp and avocado. It’s typically eaten with saltine crackers, and it is truly out of this world! Even if you’re not typically a big seafood eater, please try this recipe; you won’t be disappointed.

I’ve been so excited to share some Hispanic foods, traditions, and games this month, and I hope you’ve been able to try some of the ideas I’ve shared. This authentically Mexican dish was one of the top recipes I knew I had to introduce! It’s completely different from an American shrimp cocktail, and in my opinion, it’s much more complex and delicious. The origins of the Cóctel de Camarónes dish are mysterious, but there was an early version that appeared in the 1961 cookbook by Maria A. de Carbia called Mexico Through My Kitchen Window.

You definitely do NOT drink a Cóctel de Camarónes, but it’s often served in a cup. This version is hearty and savory with some heat! Cilantro stars as a flavor, making its way throughout the whole dish. To me, it tastes like being on vacation, but also like home!

When you’re purchasing shrimp, make sure they’re fresh! If buying whole shrimp is new for you, take a quick look at some tips and tricks (there are even videos available) on how to ensure that you’re getting the best quality seafood. If you have access to a fishmonger or seafood market, that’s a fantastic choice.

Peeling, deveining, and cleaning shrimp can feel intimidating at first, but trust me, it’s worth the effort! Watch a quick tutorial if you feel the need! After your shrimp are ready, there’s just a bit of chopping of veggies before you combine everything. Make sure to allow enough time for the cooked shrimp to cool down, and a few hours in the fridge with all ingredients mixed to allow the flavors to meld.

This is such a great recipe to bring to a late summer barbeque or just enjoy on your own while you soak up the last bits of summer warmth. If you’re a fan of heat, you can easily adjust to increase the spice level, or decrease if you’re going to be serving it to the kiddos, too. I’m so excited for you to try it; let me know what you think!

To cook the shrimps: 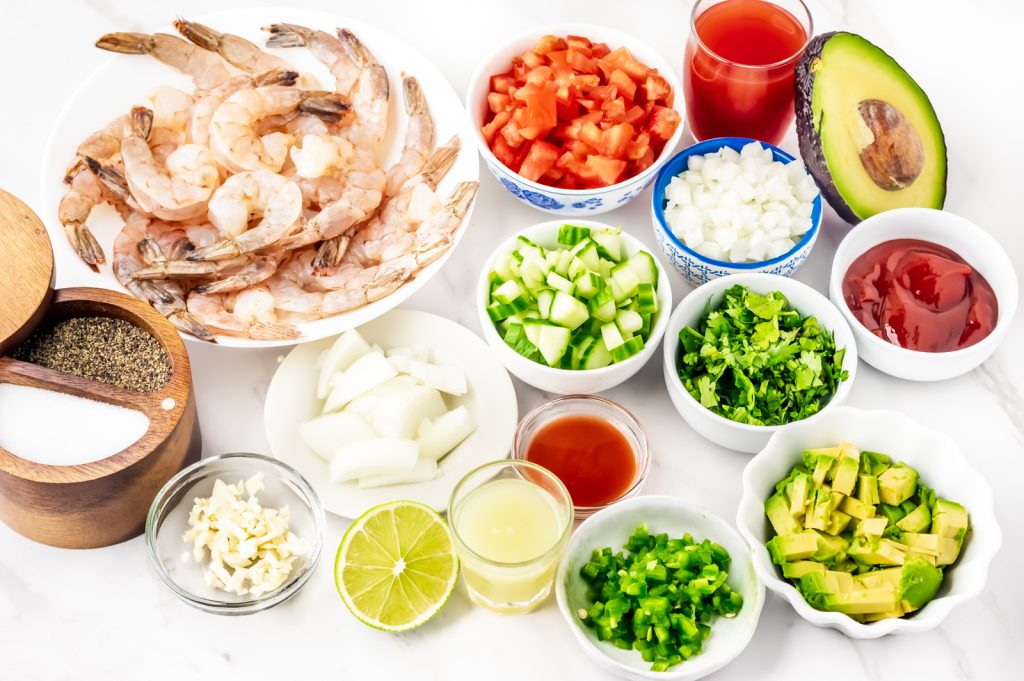 2. In a saucepan, combine the shrimps, onion chunks, chopped garlic, salt and pepper. 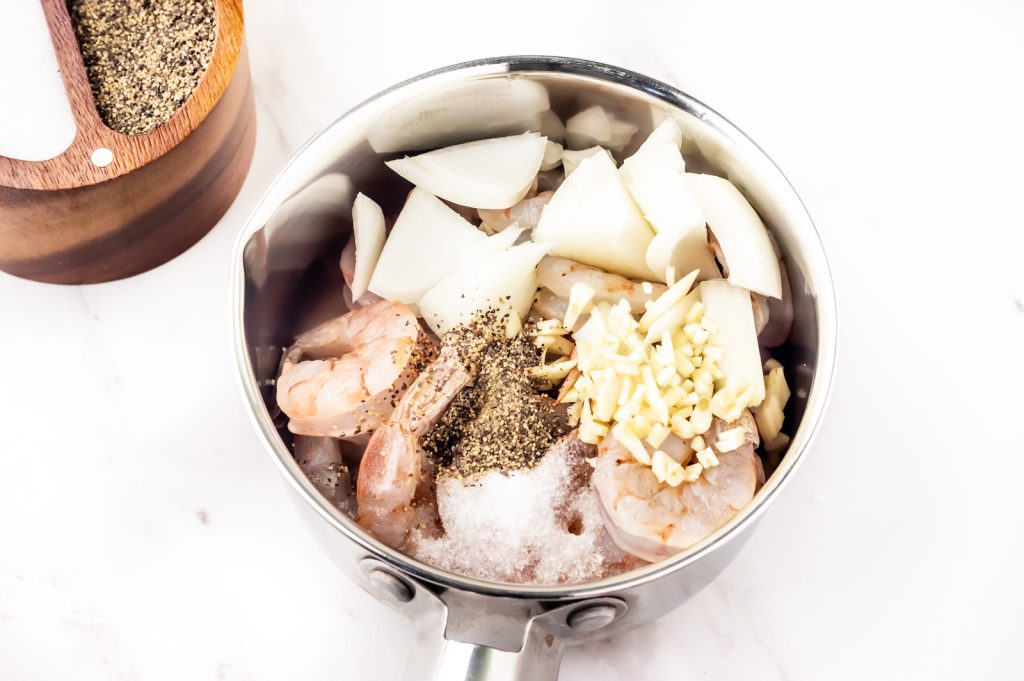 3. Add water and bring it to a low boil over medium heat. Make sure the heat is gentle. Rolling boil will make the shrimp tough. Simmer for 2 minutes or until the shrimps are cooked. 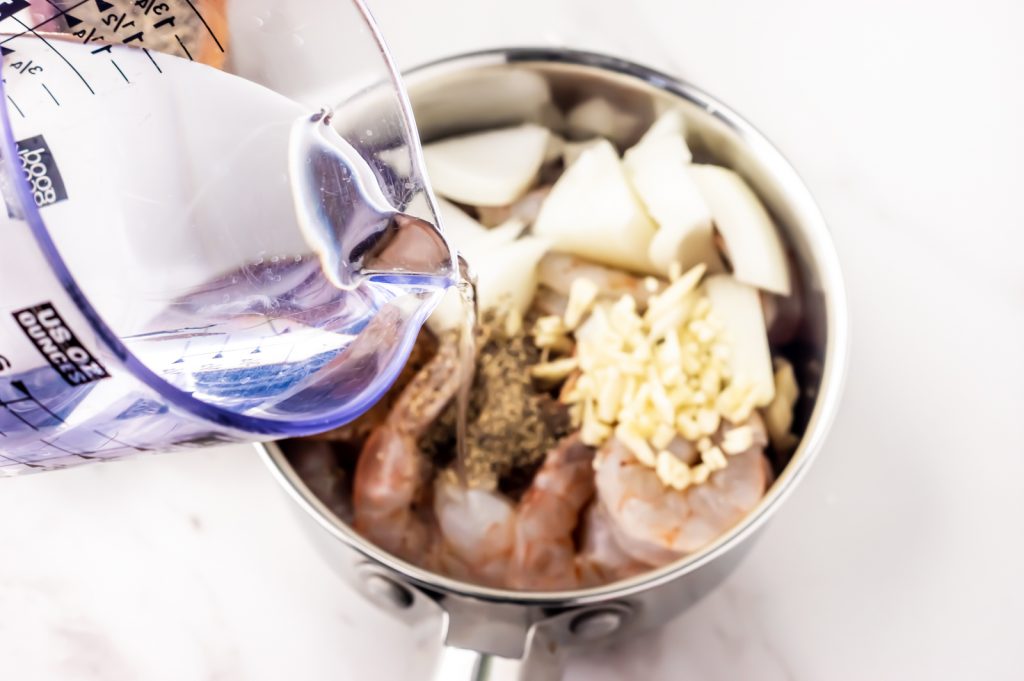 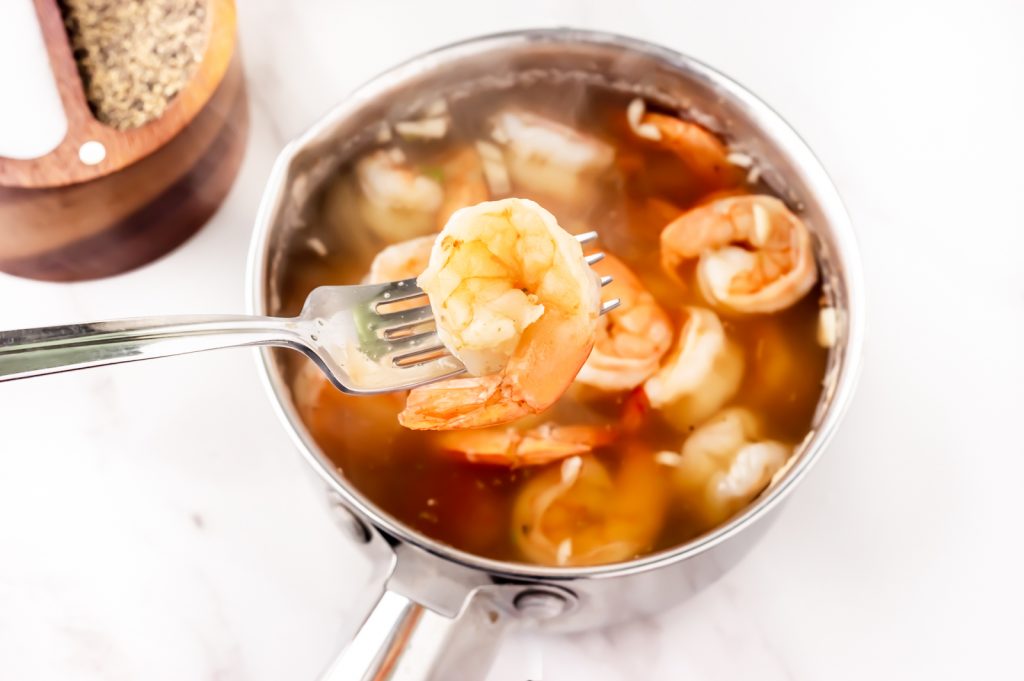 4. Drain the water, discarding the onion and the garlic.

5. Let the shrimps cool down to room temperature.

6. In a large bowl, combine the ketchup, tomato-clam juice, lime juice, hot sauce, salt and pepper. Whisk it until the ketchup dissolves. 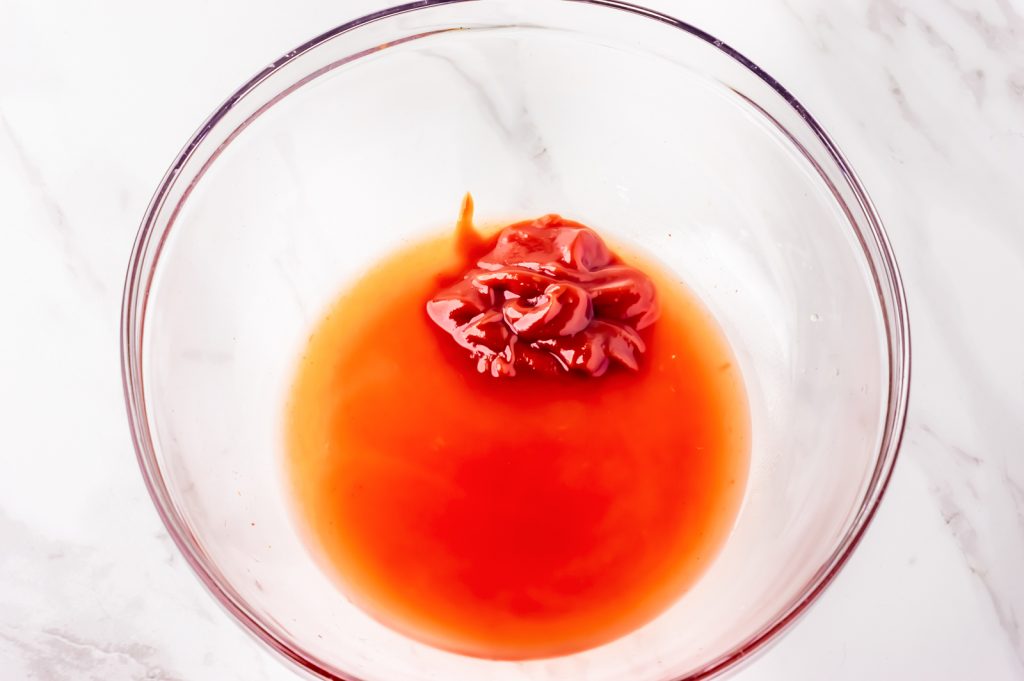 7. Add the cooled shrimps and mix. 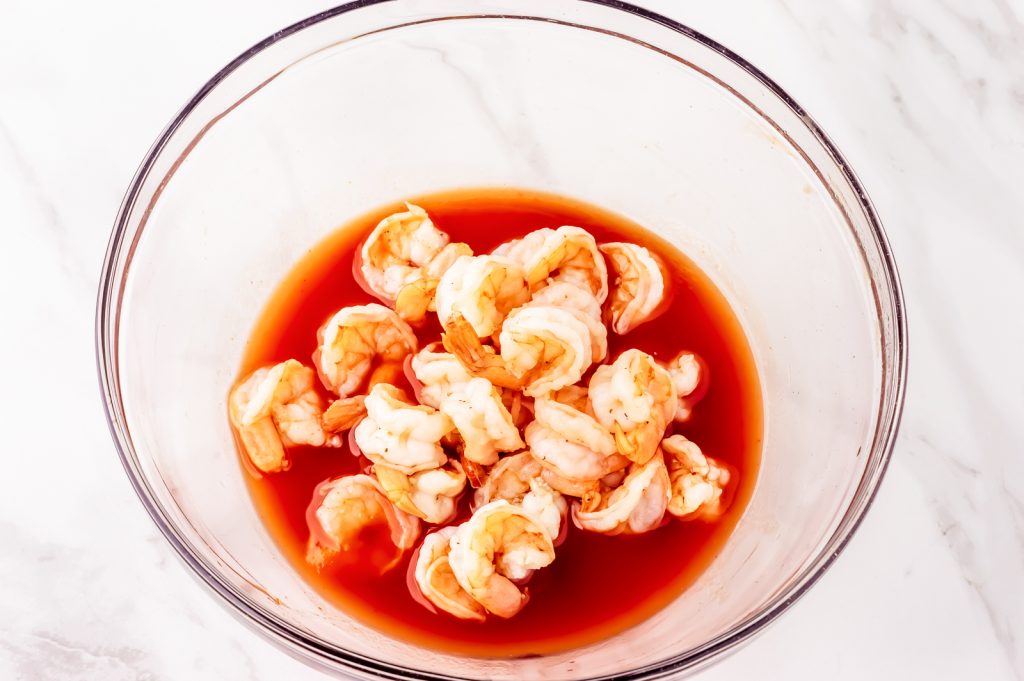 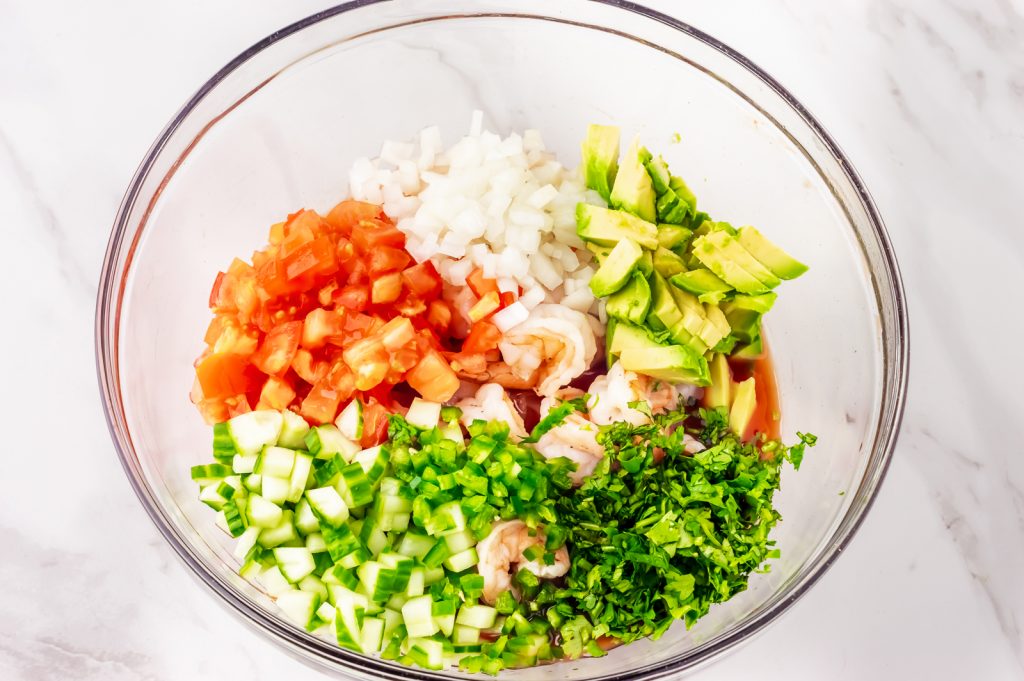 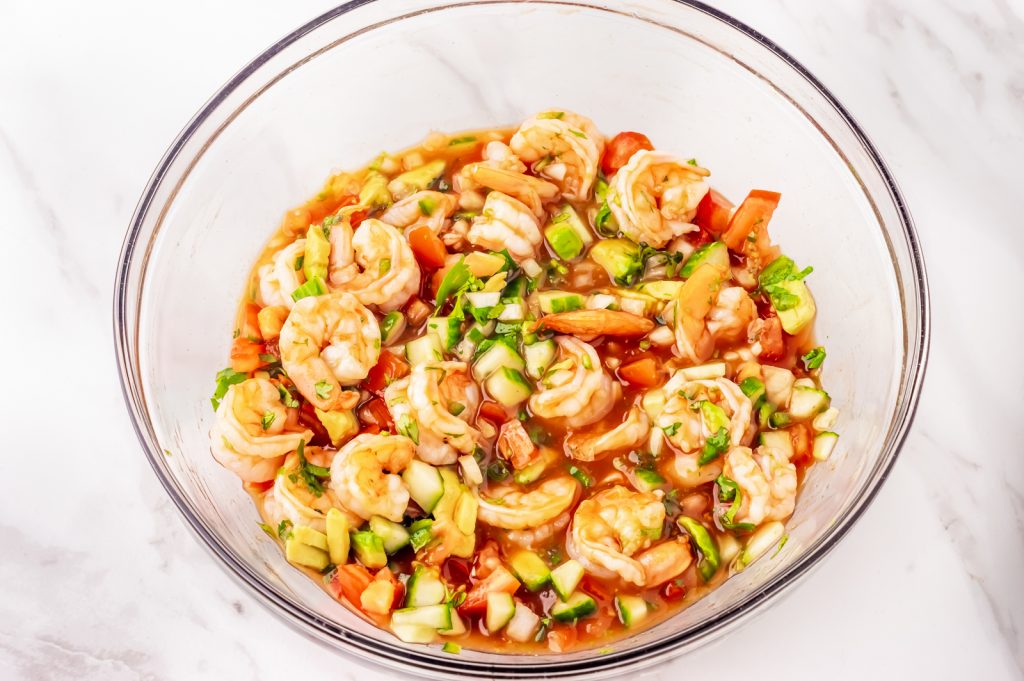 9. Taste the cocktail and add more salt or pepper or lime juice, if needed.

10. Cover and refrigerate for at least 30 minutes to an hour for the flavors combine.

11. Serve in large, wide-rimmed glasses with a tail-on shrimp, on top.

12. Garnish with a lime wedge and cilantro sprig and serve with saltine crackers. 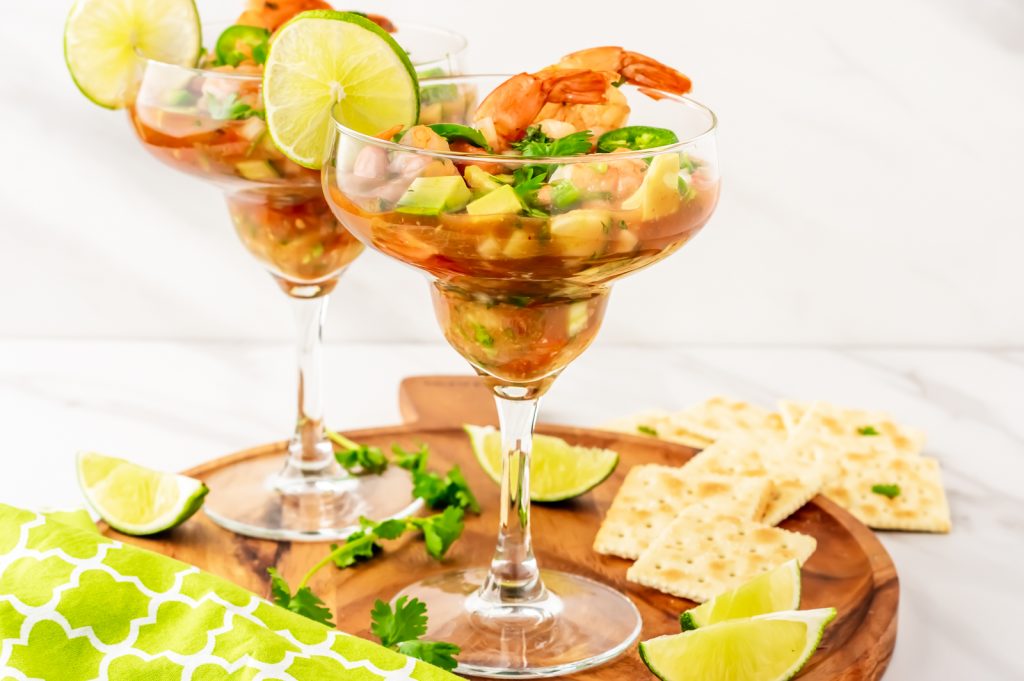 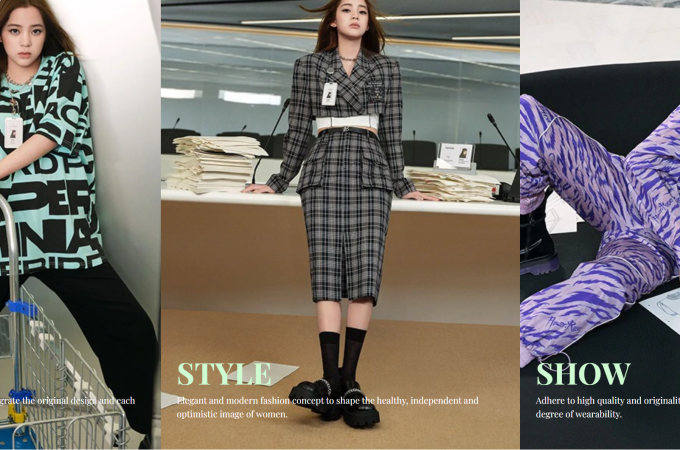 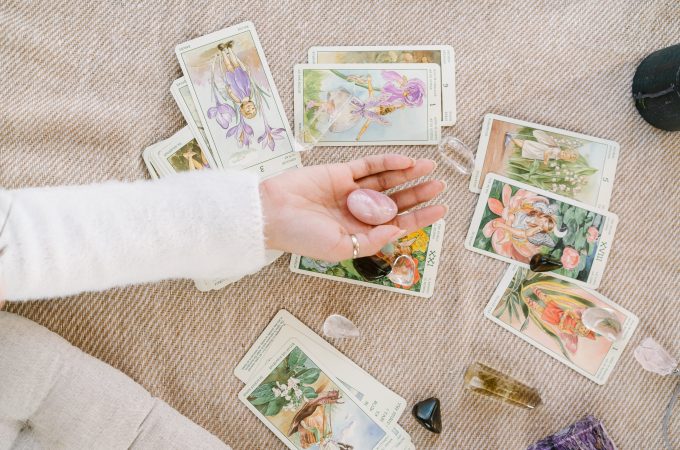 Preparing for Career Changes Through a Psychic Reading 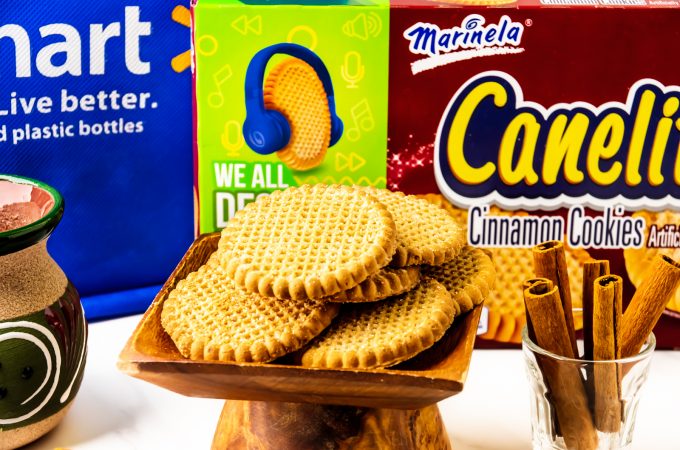 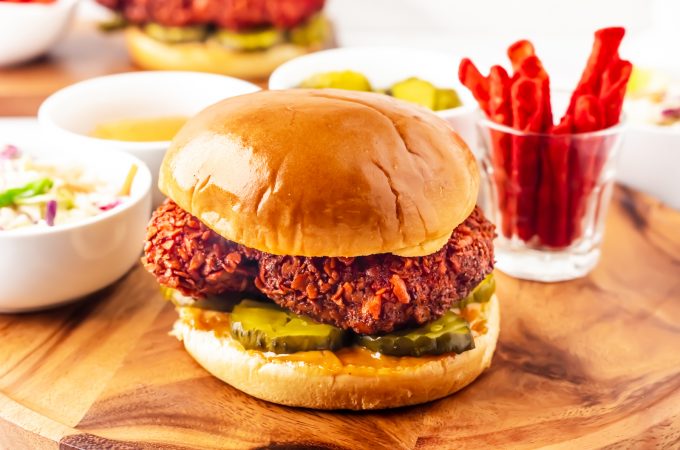 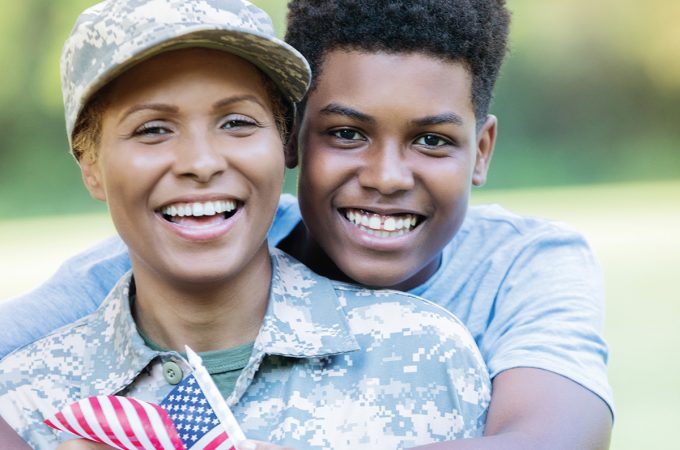 Here’s How Macy’s Is Helping the Military This Summer